Important details from the Microsoft Surface event as Microsoft pushes the envelope on innovation:

Home / Important details from the Microsoft Surface event as Microsoft pushes the envelope on innovation:

Every Surface device in some form or fashion has pushed the envelope of innovation. With Microsoft’s launch of Windows 11, its new Surface devices can disruptively challenge the creativity, innovation, and direction of the mobile PC ecosystem. Let’s take a look at what Microsoft announced and my thoughts on its new and next-gen devices.

I think you could argue that the Surface Laptop Studio has similar functionality as the Surface Book 3 but is better in many ways. Both have a tablet mode, a laptop mode, and a tent mode where the keyboard is hidden. 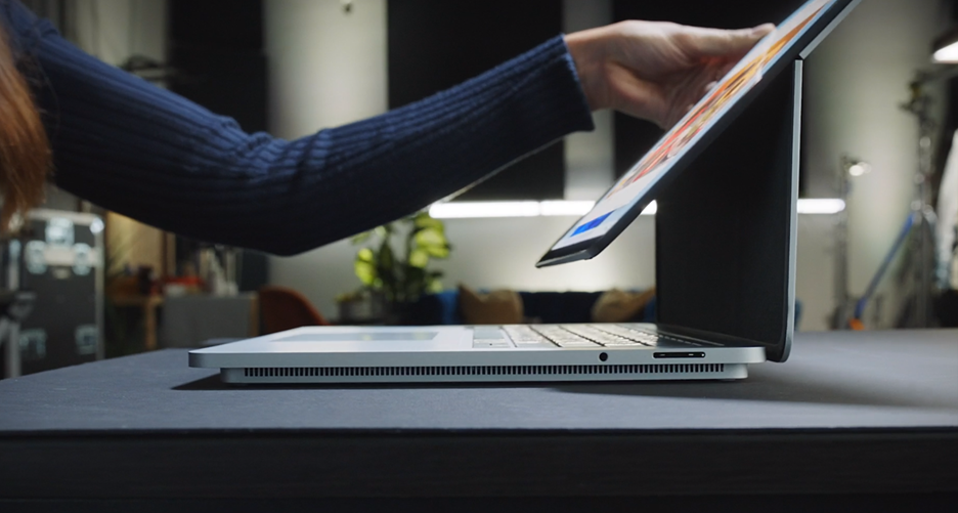 One advantage over the Surface Book is that all of the hardware and key components that would normally be in the tablet portion of the Surface Book is now all under the keyboard. With the components in the tablet portion like the Surface Book and Surface Pro, Microsoft was limited by what it could put in there; it is limited by thermals, space to keep the tablet thin, weight, and battery considerations. I will note that the Surface Book has discrete GPUs under the keyboard, which separated it from everything else, but this drove some driver challenges as the GPU had to have a disconnected mode. The biggest advantage of those is the thermal capabilities, especially since the hinge mechanism allows for new places for air to be circulated in and out. 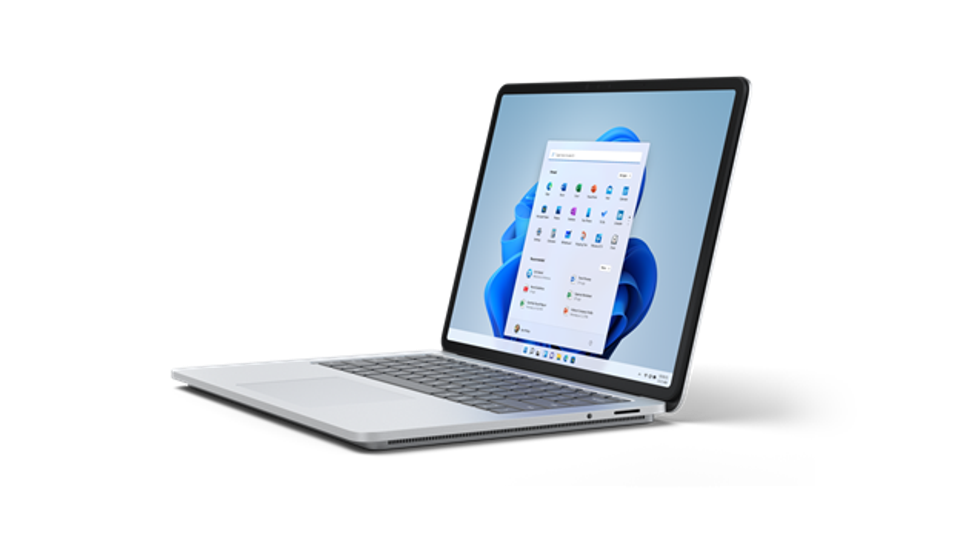 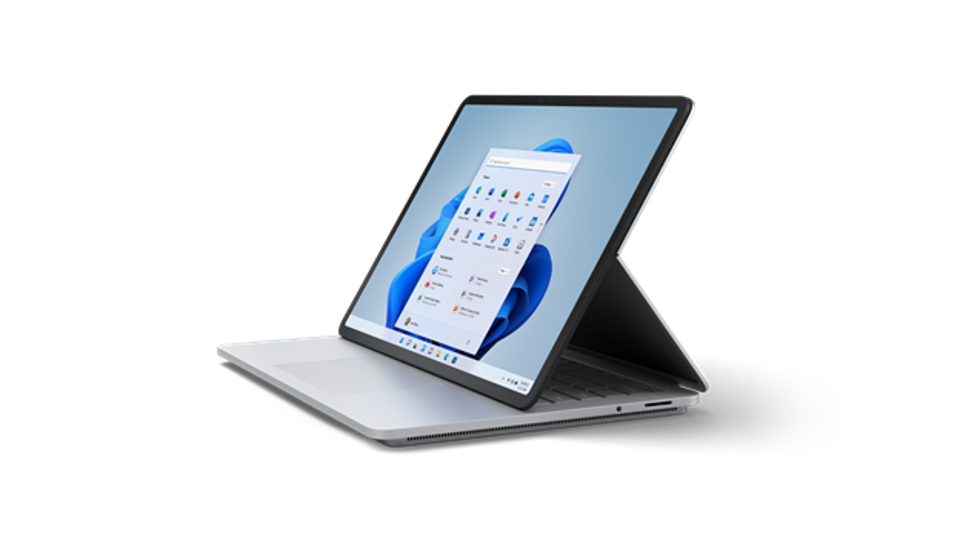 When I compare the Laptop Studio to what I think Apple will likely bring out next month with its updated Pro line, I believe Studio will get closer to what real digital media professionals would want.  While, of course, I don’t know exactly what Apple will launch, I know enough to know that it likely won’t have professional-grade GPUs or pen capability.

Microsoft also announced its new Surface Pro 8, which it says is the most significant leap forward since the Pro 3. I would tend to agree. It has 11 Gen Intel Core processors, is built on the Intel Evo Platform, and has two Thunderbolt 4 ports. Past Surface devices have not had Thunderbolt 4 ports. The most likely reason being that Thunderbolt was incredibly buggy and had few peripherals.

I think the most apparent reason to include the Thunderbolt 4 rather than opting out another year is to have the Surface Pro 8 be built off the Intel Evo Platform. The Intel 11 Gen Core Processors have integrated Thunderbolt 4. While I don’t think Microsoft had to have this certification with the Microsoft brand, I do think the Intel Evo certification is well worth it from a marketing perspective. To put into perspective the performance improvements that the new processor brings, Microsoft says the Surface Pro 8 is twice as fast as the Pro 7. Not to mention the Intel Evo Platform verifies that the Surface Pro 8 has real-world performance with long battery life, instant wake, fast charging, best-in-class connectivity, and responsiveness from anywhere. 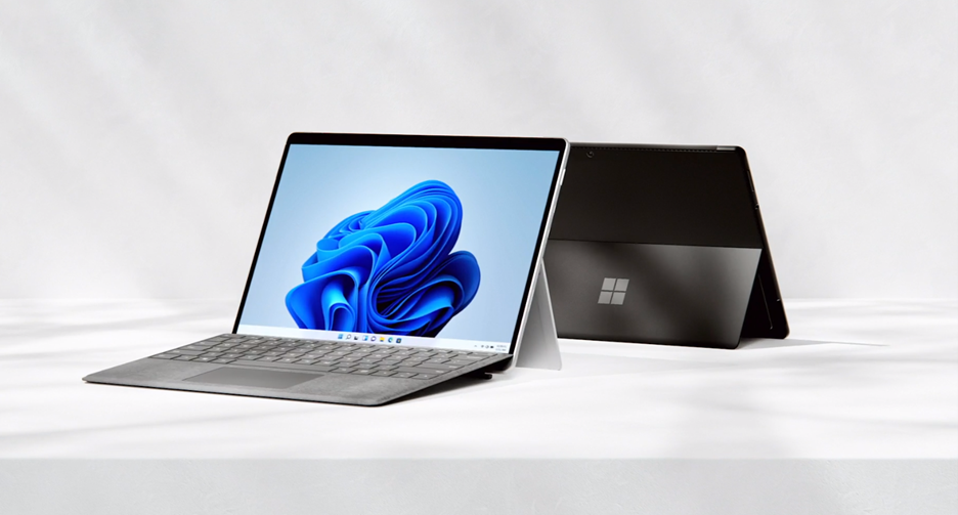 The Surface Pro 8 in Platinum and Graphite colors. MICROSOFT

The Surface Pro 8 also has updated specs that address our ever-accelerating hybrid lifestyles. It has Dolby Atmos sound, dual far-field Studio mics, a 5MP front-facing camera for better video calls, and a 10MP-4K rear-facing camera that I think will compete better with the rear facing iPad Pro cameras. It also has a more immersive 120Hz display with Dolby Vision and Adaptive Color Technology. I agree with Microsoft in saying that the Surface Pro 8 is the most significant leap forward for the Pro series since the Pro 3. The Surface Pro 8 starts at $1,099.99.

Microsoft also announced a new Surface Pro X model, its Pro tablet built on the Qualcomm Snapdragon PC platform. I think with Windows 11, the Surface X will get a lot more exciting. First off, Windows 11 works better in tablet only mode with its finger landing zones and window management. Also, Windows 11 supports ARM64EC (“Emulation Compatible”), allowing apps to be run with native speed on Qualcomm using Visual Studio tools. I think this is a big win for Arm-based  Windows devices and for the concept of the Surface Pro X as an Qualcomm-based Surface Pro. I am interested to see the performance comparison of the Surface Pro X with Windows 11 and the Surface Pro 8 with the Intel Evo Platform. The Surface Pro X has Microsoft’s custom SQ 2 silicon co-developed with Qualcomm. Microsoft’s ARM-based SQ 2 processor is a power-efficient and connectivity powerhouse, and the Evo Platforms looks toward the same qualities. Both devices aim at the new era of hybrid functionality from two separate starting points—ARM and x86.

Last year’s Surface Pro X offered the SQ 2 silicon only for the top configurations of the Surface Pro X with the starting configurations sporting the SQ 1. Microsoft says it is the most affordable entry price point yet, starting at $899.99 for the Wi-Fi-only model. I agree that the new price point is more affordable and brings it toward a more competitive spot. Keep in mind that it is the starting price with Microsoft’s custom SQ1 processor. The Surface Pro X Wi-Fi edition with Microsoft SQ2 starts at $1,499.99.

The Surface Go 3 is Microsoft’s smallest Windows 11 device that Microsoft says is 60% faster thanks to Intel’s Core i3 processor. The Core i3 is a jump up from the Surface Go 2’s Pentium processors. It has a 10.5-inch touch display with Dolby Audio, studio microphone, and 1080p cameras. 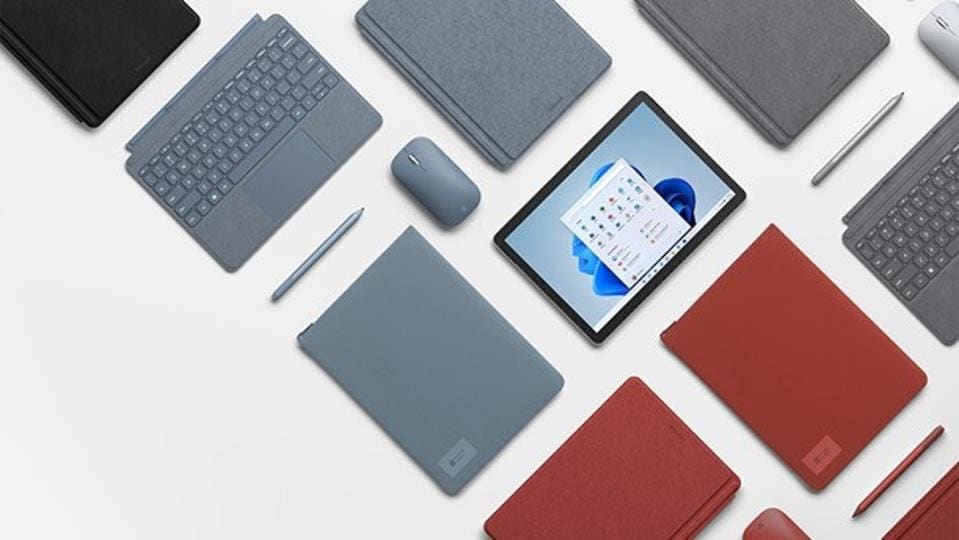 The Surface Go 3 with accessories. MICROSOFT
The Surface Go 3 is slightly larger than the smallest size for Windows 11. I think this is significant because it could tell us the direction that Microsoft wants to take Windows 11 with smaller devices. One of the reasons I think the iPad has little to no competitor is that while Apple worked hard to optimize its iOS for what we now have as iPadOS, there was never a real competitor who did the same thing. Windows 11 works better with tablets, and I think the Surface Go 3 shows that Windows 11 can be competitive as a tablet operating system—even with smaller tablets. I would even be interested in seeing a smaller, closer to the 9-inch Windows 11 requirement threshold Surface Go 3 with Microsoft’s ARM-based SQ 2 processor. It would be interesting to see how well it would compare against the newest iPad Mini. But then again, the Surface Duo 2’s combined displays are the same size as the new iPad Mini.

The Surface Go 3 starts at $399.99 for the Wi-Fi-only model. I think this is a competitive price considering the price of the iPad with a similar size display and that the Surface Go 3 has an upgraded Intel Core i3 processor.

The Surface Duo had much promise as the ultimate Android productivity device at launch, but with all new product launches, it came with some objections. You could argue that the starting price of $1,399 was justified, and as time went on, the lingering software bugs, last-generation specs, and the mediocre camera closed the argument. These objections, which some would consider a flop, resulted in Microsoft dropping the price of the Surface Duo by over half and AT&T locked Surface Duo by over two-thirds of the price. It became (still is) the perfect price to purchase for some, and it became a learning experience for Microsoft.

Microsoft addressed many of these objections, if not all. The Surface Duo 2 has the same dual-hinge design with a larger 8.3-inch PixelSense Fusion dual-display configuration. To put this into perspective, it has a larger viewing area than the Samsung Galaxy Z Fold3 at 7.6 inches while being a lot thinner. Microsoft has also curved the two inner edges of each display to bring them closer and introduce a new Glance Bar feature. The new Glance Bar is one of my favorite new features, and I think it beats peeking open the display. The Surface Duo 2 also has a higher 90Hz refresh rate. The 90Hz refresh rate will feel snappy, and I am pleased to see it on the Surface Duo 2. The difficulty in giving both displays a high refresh rate is that both displays need to be in sync.

The biggest and what could be the most loved and controversial change to the Duo is its new dynamic triple-lens camera that now forms a bump on the back of the device. It is controversial because it now keeps the device from folding 360-degrees. In some ways, it could reduce the device’s thinness value prop because the camera bump is in the way. However, the camera bump has a magnetic mechanism that snaps the displays together and is angled for a smaller gap between displays.

One of the first thing I will look for when I can use the new Duo is the triple-lens camera’s software. Good camera hardware calls for good camera software, and I think the first-gen camera could have been improved with better camera software. However, the new Snapdragon 888 processor and its Spectra 580 ISP that takes advantage of a triple-lens camera make the camera thinness compromise well worth it. The Surface Duo 2 has a 12MP wide-angle lens, 12 MP telephoto lens, and a 16MP Ultra-Wide lens, and a Time of Flight sensor on the back. 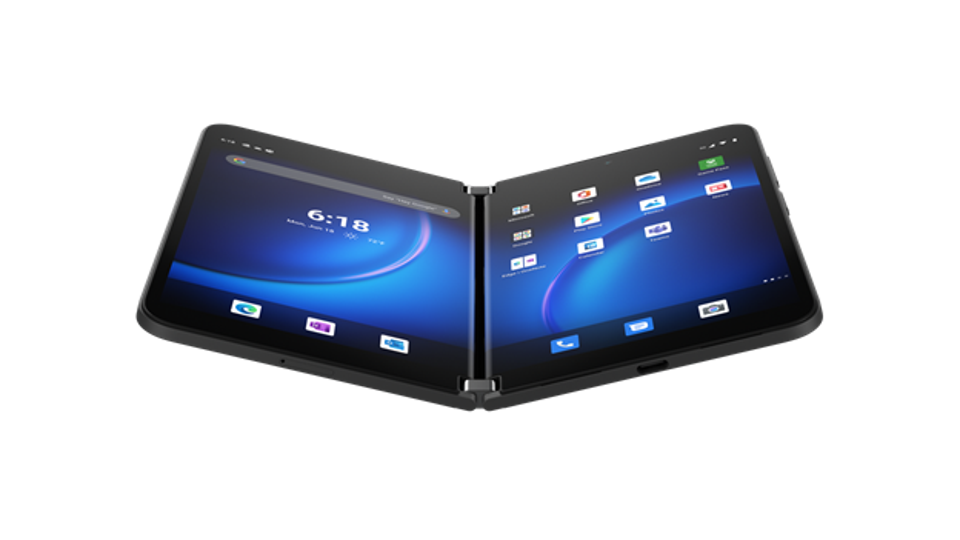 The inside of both displays is curved to make for a smaller gap between the dual-display design. MICROSOFT
The Qualcomm Snapdragon 888 turns the Surface Duo into a powerhouse—a 5G powerhouse at that. The Surface Duo 2 has mmWave and Sub-6 bands for fast 5G speeds and even faster 5G speeds. The Surface Duo is no longer one processor behind by year, and I think it alone solves many first-generation objections. Microsoft has also upgraded the RAM from 6GB to 8GB. This upgrade should help with the Surface Duo 2’s software when it is running multiple apps at a time on each display.

The last objection that Microsoft addressed, which was a no-brainer, is its upgrade to Android 11 with better support for dual-screen devices.

It now has NFC for contactless payments and a new dark color Microsoft calls “Obisidian.” Overall, I think Microsoft improved on the Surface Duo in places that needed improvement and this is key in new product categories like this.

The last new device I want to cover is the Surface Slim Pen 2 because it can be used on all the newly announced devices. It has also become a key Surface companion considering it has a place to be stored on almost all the Surface devices. 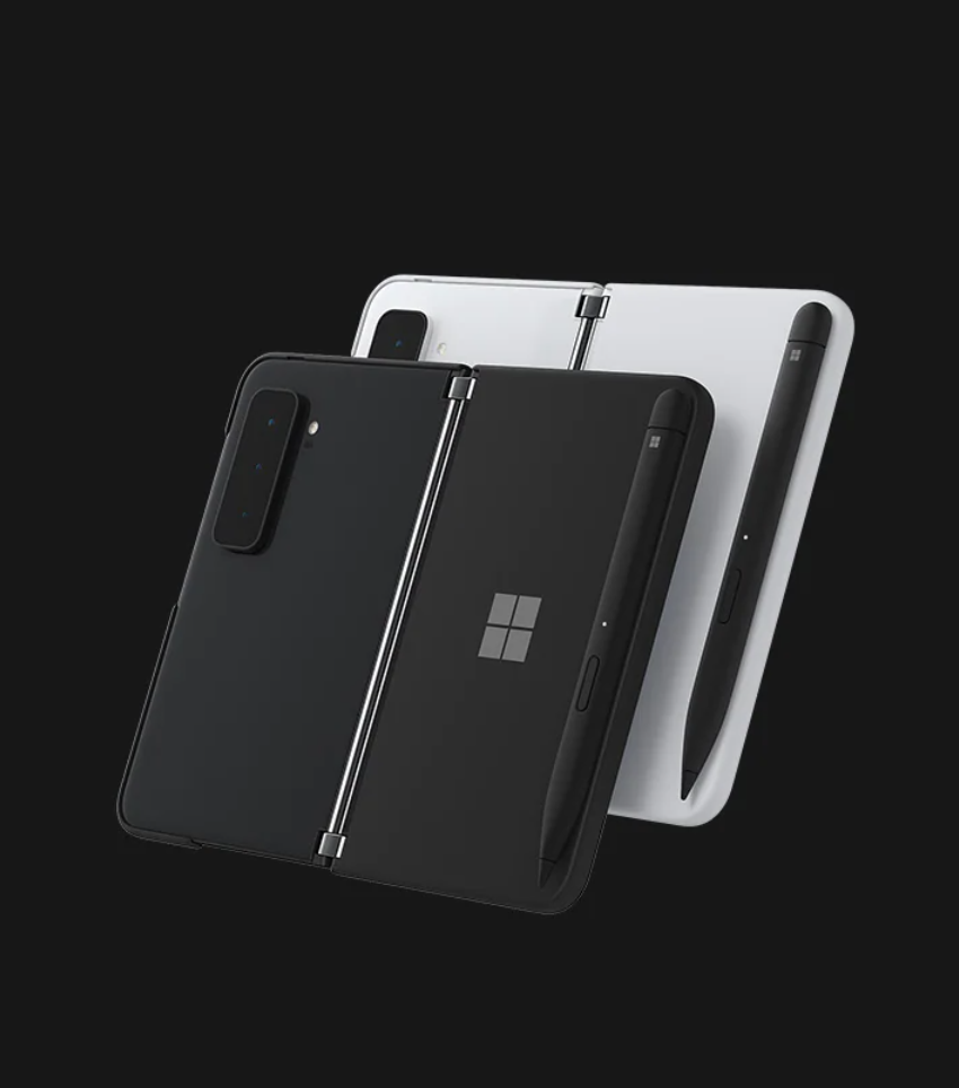 The Surface Slim Pen 2 snapped magnetically to the back of the Surface Duo 2. MICROSOFT
The Surface Slim Pen 2 has a sharper tip with zero pressure force and ultra-low latency. Microsoft has also implemented a custom G6 processor into its Surface Pro 8 and Surface Studio, providing tactile signals for a better pen and paper feel. I am very much looking forward to trying this out as I’m not a big pen person.

There was a lot to cover today with the Microsoft Surface event, and I think every new and upgraded device had a sweet surprise of its own. Microsoft continues to push the envelope on innovation with its Surface devices. I think the Surface Laptop Studio will find its niche and satisfy those who feel the Surface Book doesn’t offer enough performance. I’ll be interested to see how Microsoft positions this versus the new and upcoming MacBook Pros. The Surface Pro 8 has made a huge leap forward with its design and is built on the Intel Evo Platform. I think the Surface Pro X will benefit the most from Windows 11 and the lower $899 entry price and I think the Surface Go 3 has the most to prove on Windows 11 as a small form factor tablet. If I were handing out rewards, the Surface Duo 2 would get the most improved thanks to its new Snapdragon 888 and camera. I’m excited to get my hands on these devices and test them out myself.

These new devices have shown us that Windows 11 is an adaptable operating system that works better with tablets. From the performance-heavy Surface Laptop Studio to the Surface Go 3, Windows 11 is optimized for it all.