3D bioprinting takes a stride towards the goal of printing human organs:

Home / 3D bioprinting takes a stride towards the goal of printing human organs:

In recent years, 3D bioprinting has made huge strides toward the goal of printing of organs that can be successfully transplanted into humans. While that’s still far in the future, the method continues to be studied and perfected and advances can lead to new and improved treatments for conditions such as spinal cord injury, Alzheimer’s disease, Parkinson’s disease, brain cancer, and much more.

The 3D printing of living cells follows standard 3D printing methods, with a few twists. The printer, following a CAD file, lays down layer upon layer of material to build a shape. Instead of metals or plastics, bioprinters use bioinks as their materials. These contain living cells amid viscous materials like alginate or gelatin. The cells are often built upon scaffolding to support and protect the cells.

There have been many recent developments that are pushing the 3D bioprinting field forward. Here are six major advances.

Researchers at Rensselaer Polytechnic Institute and Yale University use a liquid bioink derived from human skin cells to print artificial skin. A blood vessel system then grows naturally within the skin.

With a working vascular system to circulate blood, a patient could assimilate the grafted tissue much more quickly, said Pankaj Karande, a professor of chemical and biological engineering at Rensselaer, who led the research. While bioengineers have had success printing living tissue, few of those few projects have included blood vessels, he said.

“The vasculature is very important because that’s how the host and the graft talk to each other,” Karande said. “Communication between host and graft is critical if the skin substitute is not to be rejected by the body.” 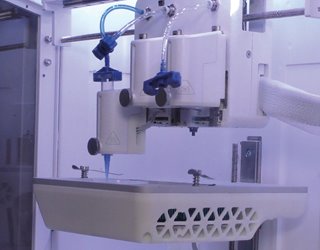 Currently, patients in need of skin grafts have two options: an autologous skin grafts, where the doctors shave off a piece of healthy skin to cover the damaged area; or artificial skin products made from materials that range from bovine collagen to polymer foam. Both have disadvantages. Autologous skin grafts are painful and create a new wound. Artificial skin products have a range of limitations—they are often temporary, don’t cover deep wounds, or don’t resemble human skin, Karande added.

His team’s method is still in the basic research stage, Karande said.

Growing Cells that Turn into Tissue

Researchers at Rice University in Houston carve grooves into the plastic threads they use to build scaffolds. They then seed the grooves with cells or other bioactive agents that encourage the growth of new tissue.

Unlike the cell-supporting hydrogel scaffolds under development in many labs, this process creates hard implants to be surgically inserted to heal bone, cartilage, or muscle, said Antonios Mikos, a biomedical engineer at Rice, who led the research. The biocompatible implants would degrade over time and leave only natural tissue.

Usually, 3D-printed scaffolds are seeded with uniform distributions of cells, he said.

“If we wanted different cell populations at different points in the scaffold, we could not do that. Now we can,” he said.

“The major innovation is the capability to spatially load a 3-D printed scaffold with different types of cells populations and with different bioactive molecules,” Mikos said. 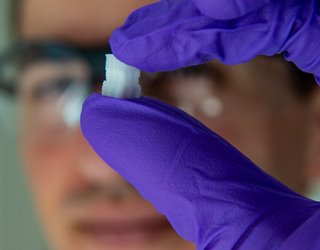 Bioprinting Parts of the Human Heart

This first-of-its-kind method brings the field of tissue engineering one step closer to being able to 3-D print a full-sized, adult human heart, according to the Carnegie Mellon University researchers who created technique.

Each of the organs in the human body, such as the heart, is built from specialized cells held together by a biological scaffold called the extracellular matrix (ECM). Networked ECM proteins provide the structure and biochemical signals that cells need to carry out their normal function. 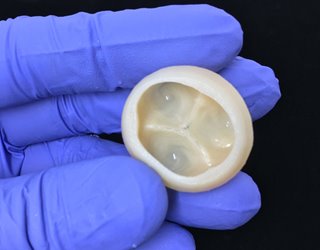 “What we’ve shown is that out of cells and collagen, we can print parts that truly function, like a heart valve or a small beating ventricle,” he said. “By using MRI data of a human heart, we were able to accurately reproduce patient-specific anatomical structures and to 3-D bioprint collagen and human heart cells.”

Collagen is hard to 3-D print because it starts out as a fluid, said Andrew Hudson, a doctoral student in Feinberg’s lab.

“If you try to print this in the air it just forms a puddle on your build platform,” said Hudson. “We’ve developed a technique that prevents it from deforming.”

The FRESH method deposits collagen layer-by-layer within a support bath of gel, giving the collagen a chance to solidify in place before it is removed from the support bath. The supportive gel is melted away by heating the gel from room temperature to body temperature after the print is complete. The researchers can then remove the support gel without damaging the printed structure made of collagen or cells.

A handheld 3D printer that deposits sheets of biomaterial skin to cover large burn wounds is another recent advance. The biomaterial also accelerates the healing process.

The device, from researchers at the University of Toronto and Sunnybrook Hospital in Toronto, dispenses bio ink over burn wound, strip by strip. The biomaterial is made from bio ink, itself composed of mesenchymal stroma cells (MSCs)—stem cells that differentiate into specialized cell types depending on their environment.

In this case, the MSC material promotes skin regeneration and reduces scarring, says biomedical doctoral candidate Richard Cheng. He heads the project under Axel Guenther, an associate professor of mechanical engineering at the school.

“Previously, we proved that we could deposit cells onto a burn, but there wasn't any proof that there were any wound-healing benefits; now we've demonstrated that,” Guenther said.

When the team unveiled its first prototype of the skin printer in 2018 it was believed to be the first device of its kind to form tissue in situ, depositing and setting tissue in place in two minutes or less.

Their bioink is an answer to the lack of bioinks that meet the demands of both 3D printing and tissue engineering, he said.

“The ideal bioink must be capable of being extruded into stable 3D structures while protecting cells during and after printing and providing an appropriate environment that can be remodeled into the target tissue,” Gaharwar said. “Unfortunately, conventional hydrogels are weak and poorly printable.”

Once the bioprinting process is complete, the cell-laden NICE networks are crosslinked to form stronger scaffolds. With the technique, the researchers have been able to produce full-scale, cell-friendly reconstructions of human body parts, including ears, blood vessels, cartilage, and bone segments.

Bioprinted Section of the Spinal Cord

This step toward 3D-printed replacements of human parts comes from a team at University of California, San Diego.

Most 3D bioprinting is done in culture dishes, but the UCSD team was able to do this in laboratory rats.

The scientists first printed out small implants made of softgel, then filled them with neural stem cells, again using a printer. The implants were then surgically placed inside a tiny gap in a rat’s spinal cord. The precision 3D printing allowed the softgel and cellular matrix to fit accurately into the gap, or wound, said Shaochen Chen, a professor of nanoengineering at the university and a team leader.

Over time the new nerve cells and axons grew and formed new connections across the cut spinal cord of the animal. These nerve cells connected not only with one another but with the host spinal cord tissue and the circulatory systems of the rat. The lab-grown cells then successfully bridged the gap in the spinal cord and partially restored movement to the animal's hind quarters, said Mark Tuszinski, a professor of neuroscience at the university.

The researchers said that bioprinted tissue can be used to test the effects of drug treatments and, eventually achieve the 3D bioprinting goal: printing entire organs that can be grown and then transplanted into a patient.